skip to main | skip to sidebar

There Ain't Nothing Sacred About a Hole in the Ground 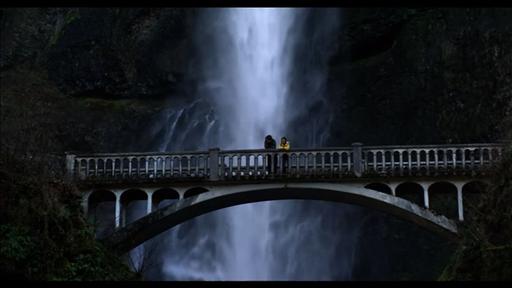 A little slip of a movie. I only vaguely know what mumblecore is, and I’m pretty happy in that being the extent of my knowledge. Cold Weather I guess is mumblecore in how it shows the current sad slackerdom of the young American dude, and does so with elliptical, realistic dialogue. I liked Cold Weather primarily in how it borrows just enough from the crime genre to tell an incredibly small and kind of touching story. It plays with genre in a way that seems respectful rather than ironic, and retains enough genre-based plot that it’s not just about some jobless young hipster not attempting to not articulate what he’s not sure he’s feeling. It looks like Brick, and in its focus on the young and essentially powerless it’s also a bit similar, but it’s loosely realistic with its dialogue, unlike the excellent mannered dialogue of Brick, and tiny in scope compared to Brick’s epic sweep. In an odd way, I think they’d make great back-to-back viewing. Brick goes big and tragic and nails it, while Cold Weather goes exceptionally small, stays true to its scope, and at its heart is really sweet (not a thing I commonly say about crime movies).

Bring Me the Head of Alfredo Garcia:

Exhaustion oozes from every scene, every gesture. Warren Oates drags himself towards a redemption that we all know, Oates included, isn’t coming. The head rots in the shotgun seat. The movie drives itself ragged bringing the head home, at one moment Oates crazy with his quest and talking to the head, the next lugging it like every damn mistake he’s ever made. I know it’s been said a million times, but this movie is saturated with Peckinpah’s anger and his resignation; he’s present everywhere. It’s got all the Peckinpah signatures, from the enjoyable slow-mo gunshot deaths to the (at least) consistently unsettling misogyny. If The Wild Bunch is his initial masterpiece, and Straw Dogs his brilliant, queasy oddity, then Alfredo Garcia is Peckinpah’s personal masterpiece, flawed and weird, but one of those movies that couldn’t ever conceivably be made by anyone else.

I have a personal hesitation with old black-and-white movies that’s rooted in feeling that I should watch them rather than wanting to watch them. I approach them with the idea that I’m going to learn something from them rather than enjoy them. The ones that really hit me, like The Hustler did, make me forget why I’m watching them or what I’m supposed to be learning. Moments of melodrama aside, it’s a sad, contained coming-of-age story, and it’s driven by Paul Newman’s incredible performance. He proves that a fine actor can play through his looks, rather than obfuscating them to show he can really act (Brad Pitt in 12 Monkeys, Charlize Theron in Monster, etc. etc.). He uses his massive natural charm to portray Fast Eddie’s immaturity, then allows that charm to disintegrate as the character does. Jackie Gleason’s Minnesota Fats is incredible as Fast Eddie’s foil, a dapper fat man who’s all stillness against Newman’s constant motion. The shot at the end that shows Fats to be more performing monkey than untouchable champion is a wonder—one of those moments where a massive, tangential story blossoms out of a few lines of dialogue and a change of expression. The Hustler’s a movie, like Casablanca, that may seem stiff in the style of its era, but has a story that’s timeless precisely because it still feels vital. It’s a classic in that way, not as something that should be seen to understand its effect on later movies, but as something that should be seen because it still cuts.

Its flashback cuts are showy in a way that’s not nearly as natural or smooth as the movie seems to want them to be. And its central theme, of the past’s impact on the present, is not delivered with a light touch. But it’s bold in allowing the story to sprawl all over the community, making it democratic in its storytelling and comprehensive in investigating how the past isn’t the past. My favorite part of the movie, apart maybe from Chris Cooper just doing his thing as an empathetic everyman, is how it doesn’t cheat at the end. Spoiler: the story builds to an inevitability-that Cooper’s Sam and Elizabeth Pena’s Pilar are united by the past in ways they couldn’t imagine. Normally, a movie will either drop in some deus ex machina to allow the two romantic leads to get together (deeply unsatisfying) or have them remain tragically in love and tragically apart (which might be “realistic”, but is still unsatisfying). Lonestar sticks to its guns, not even making a big deal of the fact that its main characters are half-siblings who intend to keep on tenderly boning under the eyes of the lord. Sure it’s kind of creepy, but it’s admirably creepy.

As far as I know, Mexico’s current troubles have largely been undiscovered country when it comes to crime film. It makes sense in that things are still unfolding in horrifying fashion, making it a bit of a “too soon” and making it tough to go down and get the details right. Sin Nombre explores the particular aspects of today’s Mexican crime—wrapped up in immigration and aspiration and drugs—and does so by focusing entirely on character. It’s dedicated to ignoring the larger themes (unlike, say, Traffic) and dealing with the conflicts of its central characters. Those conflicts unspool organically, as any realistic character-driven narrative should, and slowly earn all the tragedy and hope of its story. The camera stays so closely focused on its two main characters that, when a secondary character dies by falling off a train, there’s only that brief, terminal slip, seen from a main character’s perspective, and then that secondary character is gone. Sin Nombre’s rigor gives the movie a feeling of deep, moving realism. If Breaking Bad’s doing an entertaining job of showing the upper reaches of Mexican crime, Sin Nombre shows the absolute lowest rungs, the teen foot soldiers and collateral Mexican civilians. Plus, as currently villainous groups go, MS-13 ranks among the most terrifying.

Yr honorable mentions:
Animal Kingdom: Some reviewer said that it was “the Australian Goodfellas” and that’s maybe correct if someone had only seen the last 1/3 of Goodfellas. The movie does a good job of showing the unraveling of a crime family, and at its center Jacki Weaver turns in a really fantastic performance as the flip side of the Livia Soprano evil matriach coin, with all the brutal manipulation but instead cloying and hovering with her affection. Still, it’s only a 1/3 of Goodfellas, because Goodfellas shows the giddy rise and the brief, unstable middle. Animal Kingdom is all fall, and it left me wondering not only what it was like when times were good, but how it could have ever possibly been good—a problem because the movie implies that, in some distant past, it really was. Unlikely and unexplained plot twists aside, the lack of those glory days makes Animal Kingdom a functional, but terminally lopsided movie.

The Getaway: In a lot of ways, a Peckinpah movie that doesn’t seem like it was made by Peckinpah. I think I like it partly because it gets a bad rap, an ungainly Peckinpah toss-off. But Ali McGraw manages to be a luminous beauty and a deeply complex and scarred character at the same time (though how she was ever seduced by Ben Johnson remains an impenetrable mystery). Steve McQueen is even more scarred, and he dials back his nuclear charisma just enough to make both his badass rep and his loveable loserdom plausible. Together, they play off each other in a way that made me believe them as a couple, and root for them in that magic way that narrative makes you care about people who aren’t real. It’s got a well-plotted heist; it’s got Sally Struthers as a cuckolding floozy; it’s got built-up shootouts and bottoming-out characters. More than anything, it’s got a well-earned and guarded happy ending. Considering Peckinpah’s canon, that alone made it worthy. Had I not seen Alfredo Garcia in the same year, this would have gone in my top five.

Tinker, Tailor, Soldier, Spy: More a spy movie than a crime movie, though it spends its entirety investigating treason using spy tactics. Gary Oldman, of course, inhabits the role to the degree that he’s only somewhat Gary Oldman at all. It looks like an honestly grimy, bureaucratic Mad Men, and it dispenses with the progression of plot in as efficient a manner as possible. Still, the true delights of the book were the depth of detail, the untrustworthiness of a plot that’s based on subjective telling, and the slow revelation of Smiley’s interiority as the plot advances. The story progresses with swift brutality in the movie, but the constraints of time flatten out all the doubts and details, sacrificing nuance for unrelenting forward motion. Plus, the last moments of the movie rank up there with The Departed and About a Boy in the pantheon of fine movies that shit all over themselves in figuring out a way to finish. Please, please read the book first.

Yr. Honorable Mentions that I didn’t feel I had much to say about:
25th Hour: The AV Club’s talked a bunch about this one, so I’ll just say that it’s a damn fine movie with a great cast that I didn’t think was great mostly because I think the book’s better.

The Good Thief: An update of/riff on Bob le Flambeur, it’s got Nick Nolte, reason enough to see anything. I really liked the story, liked the characters, liked the heist, and constantly, constantly wished Neil Jordan would stop doing shit to remind us that HE WAS DIRECTING THE MOVIE and just tell the fucking story.

Infernal Affairs: I’m sure people will think I’m an idiot for this, but I liked The Departed better (and not just because of Boston). Maybe it’s my not-great inclination to like the iteration I experience first (saw Mystic River before reading it, like the movie; read Winter’s Bone before seeing the movie, like the book; read 25th Hour before seeing the movie, etc.). I think that’s partially it, but also I think The Departed took the story and tightened the hell out of it. I also think I might have liked it more if either A.) I picked up on some cultural nuances, and/or B.) It didn’t seem like it was subtitled by Babelfish.

Honorary re-watch:
Ghost Dog: The Way of the Samurai: I saw Ghost Dog when I was in my early twenties and thought I got it and was bored by getting it. A decade later, I didn’t get it nearly enough. I couldn’t appreciate how firmly the movie sets its rules—Ghost Dog lives by his code, the Mafia are cartoonishly fallen—then explores what those rules mean. I also couldn’t appreciate how it stays in the bounds of genre, both samurai and mob, and makes something interesting happen by combining them. There are still the moments that seem incredibly goofy to me: Ghost Dog probably shouldn’t be practicing the noble art of the Samurai in his sweats with a little knife accompanied by moody hip-hop (though, again in hindsight, RZA’s score crystallizes the time the movie’s set in and sets the atmosphere perfectly). Still, Jarmusch’s care in making Ghost Dog a man embodying a dead ideal, having the camera capture the fleeting beauties that a man like Ghost Dog would stop to ponder, and Jarmusch showing all the ways that the Mafia failed to evolve within their own dying ideal (Cliff Gorman dropping Public Enemy in his bathrobe exists here for all time to enjoy that someone made this thing happen) made it a movie I’m not only glad I rewatched, but want to own and fall asleep to.
Posted by C. Murphy at 2:29 PM